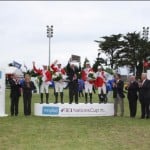 Meydan Group the official sponsors for the FEI Nations Cup Series.
The Cup will feature the ten best national jumping teams in the world competing at eight of the best venues throughout Europe with a final event at the world famous Dublin Horse Show in August this year.
Meydan Group LLC (Limited Liability Company) is the name behind the development of the United Arab Emirate’s landmark racecourse, the iconic new green 67 million square feet, state of the art development whose vision is to be ‘the lungs of Dubai’ and its environmental voice has the horse at its very heart.
The setting is to be home to the 2010 Dubai World Cup, with a state of the art racetrack and also featuring an equestrian resort as part of a major business and conference district.
exhibit 3sixty have supplied over 400m2 of sponsorship signage, winners podiums and entrance towers for the event which has been held in nine different contries