Back to List
11
Nov
Victorious debut fight for Bradley

Regular visitors to our website may remember reading about our support for local lad Bradley Goldsmith who won a place to train at the legendary Ingle Gym in Sheffield, the gym that gave the world Prince Naseem, Kel Brook, Johnny Nelson and many others.

We’re delighted to report that Brad’s professional debut at the Aston Villa Holte Suite on October 23rd, was an outstanding victory over seasoned boxer Jordan Grannum, in a shut-out points win in the fourth round.

What a debut! We’re incredibly proud to have played a small part in getting Brad the recognition and opportunity he undoubtedly deserves. But don’t take our word for this Coventry lad’s brilliance, listen to the promoters –

“Dominic Ingle wasn’t looking for any more prospects to train – until Bradley Goldsmith turned up at his gym. Ingle was impressed by Goldsmith’s amateur CV and attitude and prepared him for this professional debut. Goldsmith brought huge support with him from Coventry and they saw him use his sharp skills to keep the Londoner on the defensive throughout!”

“Brad brought along one of the best travelling support I’ve ever seen for a debut and his raucous fans raised the roof when their hero made his ring walk. Up against super-veteran Jordan Grannum, Brad was slick and smart and showed a lot of ring savvy for someone making a debut. Winning every round Goldsmith looked like one to watch and we look forward to seeing him again on a top show.”

You can watch all four rounds here – and see the future Coventry boxing legend in action! 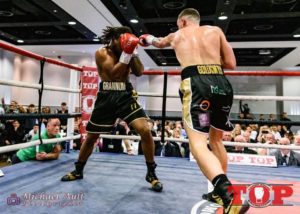 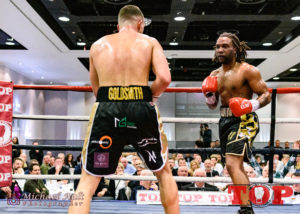